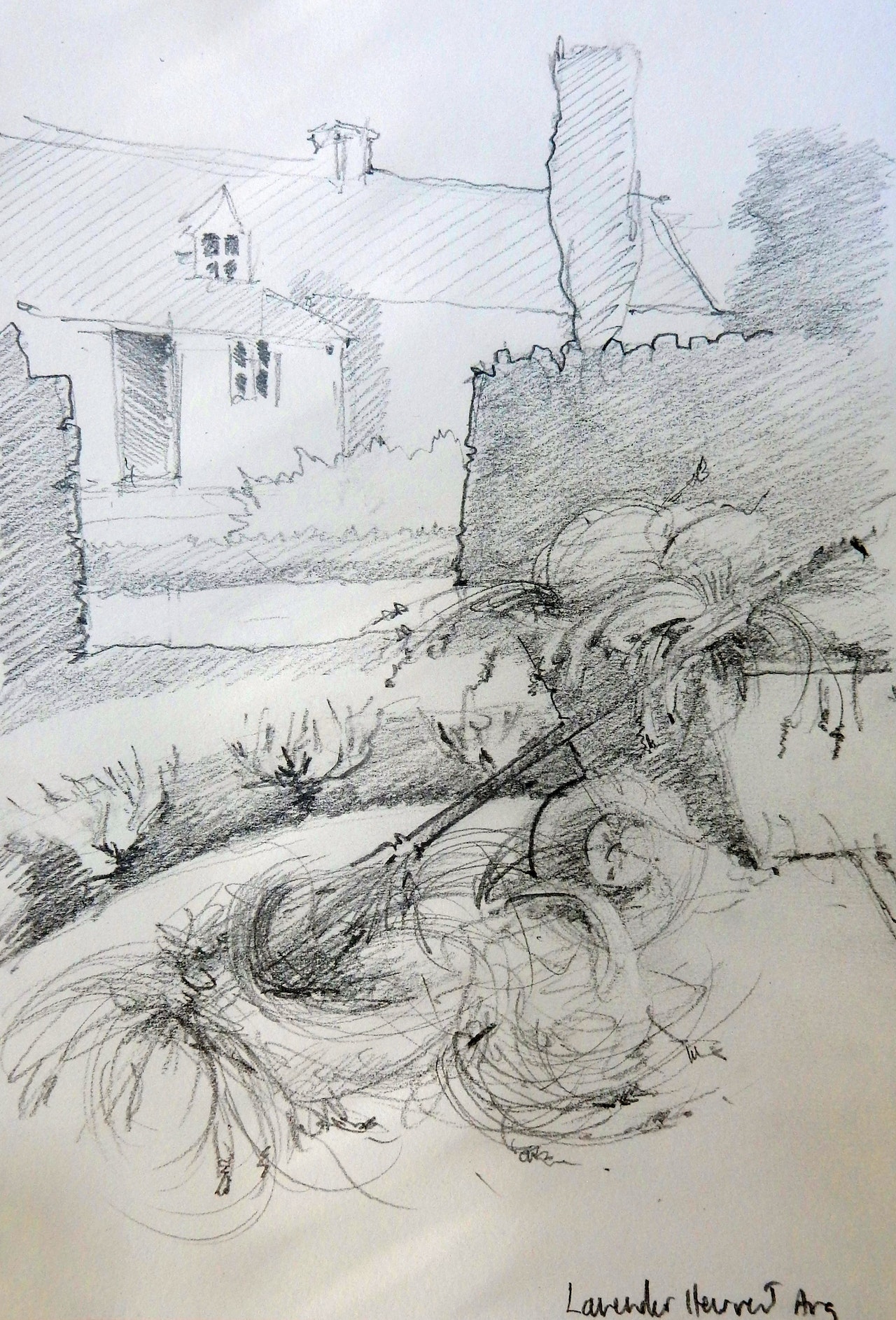 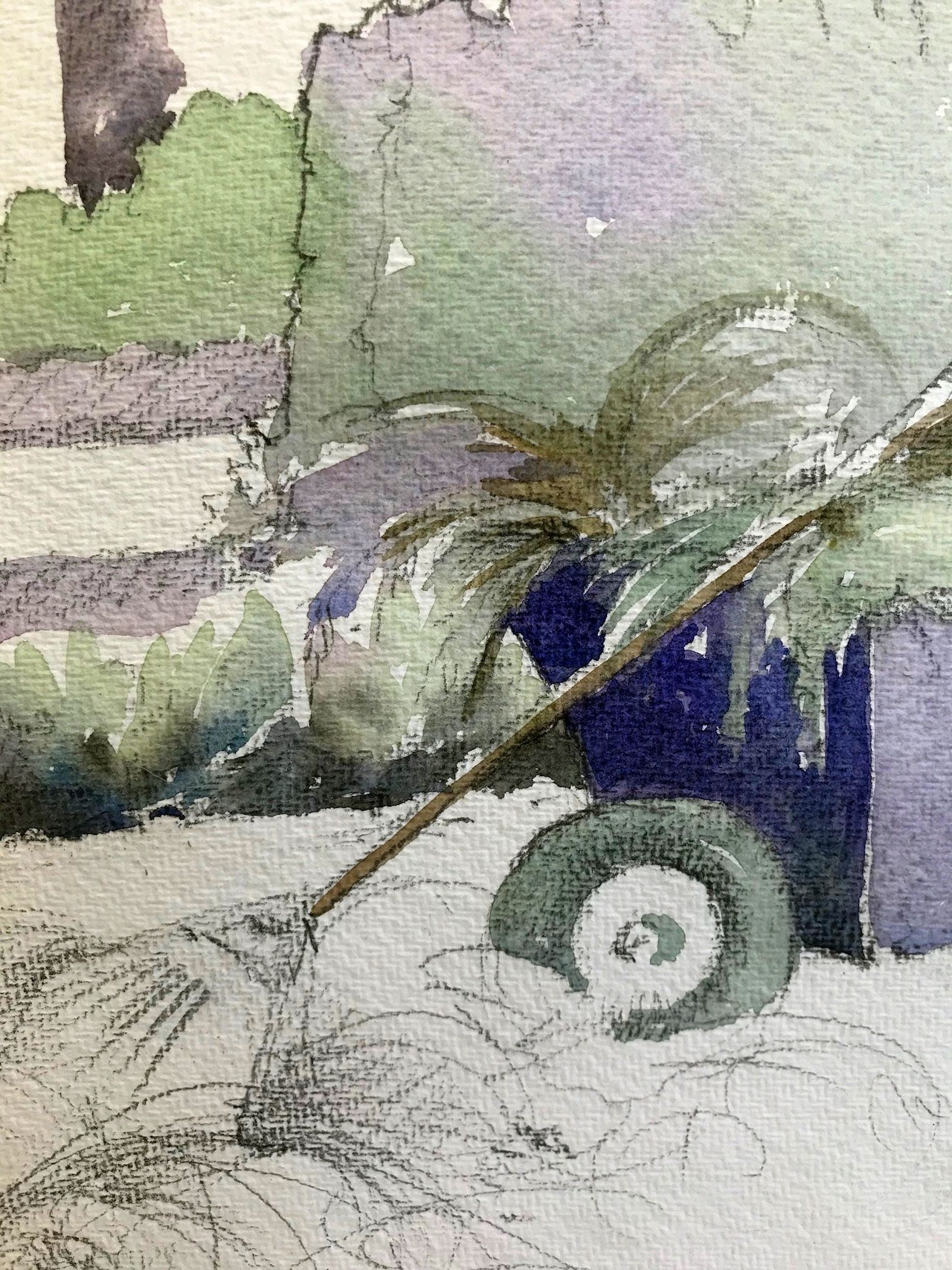 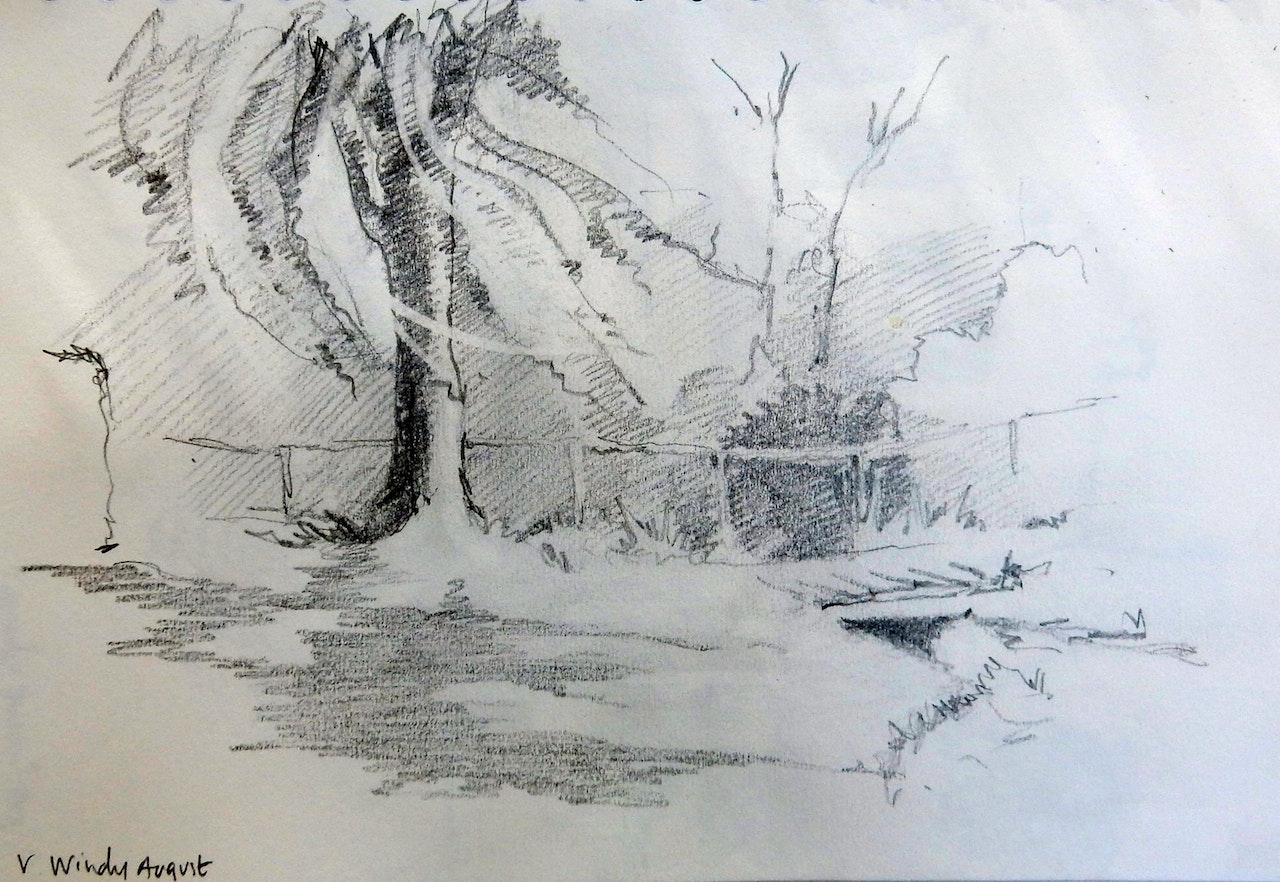 AUGUST a short article in a series FOR THE LEISURE PAINTER

How very strange it is to cast your mind back to August last year, when it feels much like August in the garden right now - what with the drought and the non-stop sunshine! I find it an odd month in the garden as there is a state of flux between high summer and autumn; everything looks rather faded and droopy. I read somewhere that eventually ‘other men and women will paint over your garden’ which is of course true, so you have to make the most of your own small notes and paintings as a true record of the present time. Sometimes it is a struggle to find something that inspires you, but it almost doesn’t matter what you choose to draw, it will develop a life and energy of its own after a while. A hitherto unappreciated corner can take on a whole new meaning.

Fig 1 pencil sketch For this study entitled ‘Incredibly Windy Day- late August’ I made a detailed thumbnail sketch to use for reference later on when I would try and capture the atmosphere by painting quickly. To achieve this spontaneity I needed to acquaint myself with the structure of the willow tree and also the shadow forms directly below it. Although this is a familiar view from my studio window, I still needed to study the shapes and forms to make a half decent job of it and there is no better way of doing this than with the good old pencil.

I wanted a Monet’s garden bridge but had to settle for a couple of old RSJ’s; so there is now a nice wheelbarrow friendly bridge over the stream which has a tricky perspective. If you are not careful it can end up resembling a gaping hole in the ground. The background for this picture is a good example of how you can make use of ‘borrowed’ landscapes and trees. When you focus on a small area, it is interesting to discover which things become important to your composition – not always the ones you would expect; in this case there are three silver birch trees in the background that just fulfilled their purpose nicely!

For this painting I worked across the ‘staple’ and made it a two pager which was twice as long as the sketch. I used a candle as a ‘resist’ to make some swaying tree marks on the rather soft khadi paper and then I set to work fast and loose! The wax lines are impossible to see at first, so you have to be brave and make some swooshes which emerge as if by magic when you put enough watercolour over the top. It is often surprising what you can create from your brush alone - for this is when you really start to paint from the heart, as if by instinct. It is also when you start to enjoy yourself! These inadvertent marks are often the best and for example, subjects like a post and rail fence look much better if they are merely passing brush marks rather than a rigid construct.

Fig 1 c) Detail of post and rail using just brush marks rather than drawing them in too rigidly.

Shadows on grass are notoriously difficult, so getting the tone right for them here was always a going to be a challenge. The key is not to overdo them or make it look overly laboured with an outline (although to be on the safe side, you do need some indication that can be rubbed out afterwards). The colours used for this were: Mostly green!! But joking apart, they were French Ultramarine, Raw Sienna, Burnt Sienna, Green Gold and Hookers Green .I find Hookers quite good for shadows on the grass because it is nicely translucent and has a lot of blue. You can also mix it with other colours to get the desired effect. Green Gold is - for all intents and purposes - a yellow in all but name.

Fig 2 The Lavender Harvest: I love painting lavender, I don’t know why, perhaps it has something to do with the colour purple which I find makes a wonderful foil when painting with greens. It works with both warm and cool palettes and if you look at the colour spectrum wheel below, it is the complementary colour of yellow with the two ‘split’ complementaries of green and orange.

The Lavender Harvest: Fig 2 a) photograph example; I include this in order to demonstrate just how much artistic license you are at liberty to take!

b) The Lavender Harvest:  A pencil sketch will never let you down. It is a fact finding mission during which you always discover things you didn’t know before. If you look at the sketchbooks of Van Gogh, he hardly digressed from the original sketch compositions when he painted the main picture. (No comparisons here!)

c) The Lavender Harvest:midway through the painting when I was working on blocking in tones using only the two colours Hookers Green and Permanent Rose. When mixed together this combination produces a nice mid grey and I ended up using it for the whole painting. A touch of sepia ink was added in the very final stages for effect. Although someone once said - when you get the pen out you know you are dead in the water!

In the absence of being able to venture very far afield during lockdown, photographs have come in very handy, although, as a general rule, I would not normally recommend working from them. Desperate times require desperate measures. Recently I have been making solo demonstration films of my painting classes in and around our village. My resident cameraman does the filming and we set out armed with sketch book and dog to make the first film in situ. This process establishes the composition so that I can transfer it to the bigger page later in the day, while it is still in my head. I then post the photo and my sketch on to the website so that those who are interested can access it. We then make two more short films of the painting process back in the studio. I only use the I photos for reference – so if you do this at home, try NOT to stick verbatim to the photographic image otherwise it will only end up as another reproduction. Use it as an aide-memoire, but remember that even ten minutes en-pleine-aire will help you to get the atmosphere and feel of the place. If you would like to access these films then do have a look at my website www.amandacooper.co.uk and click on https://www.amandacooper.co.uk/portfolio/landscape-lockdown-2020

Tagged: diary of a garden in watercolour