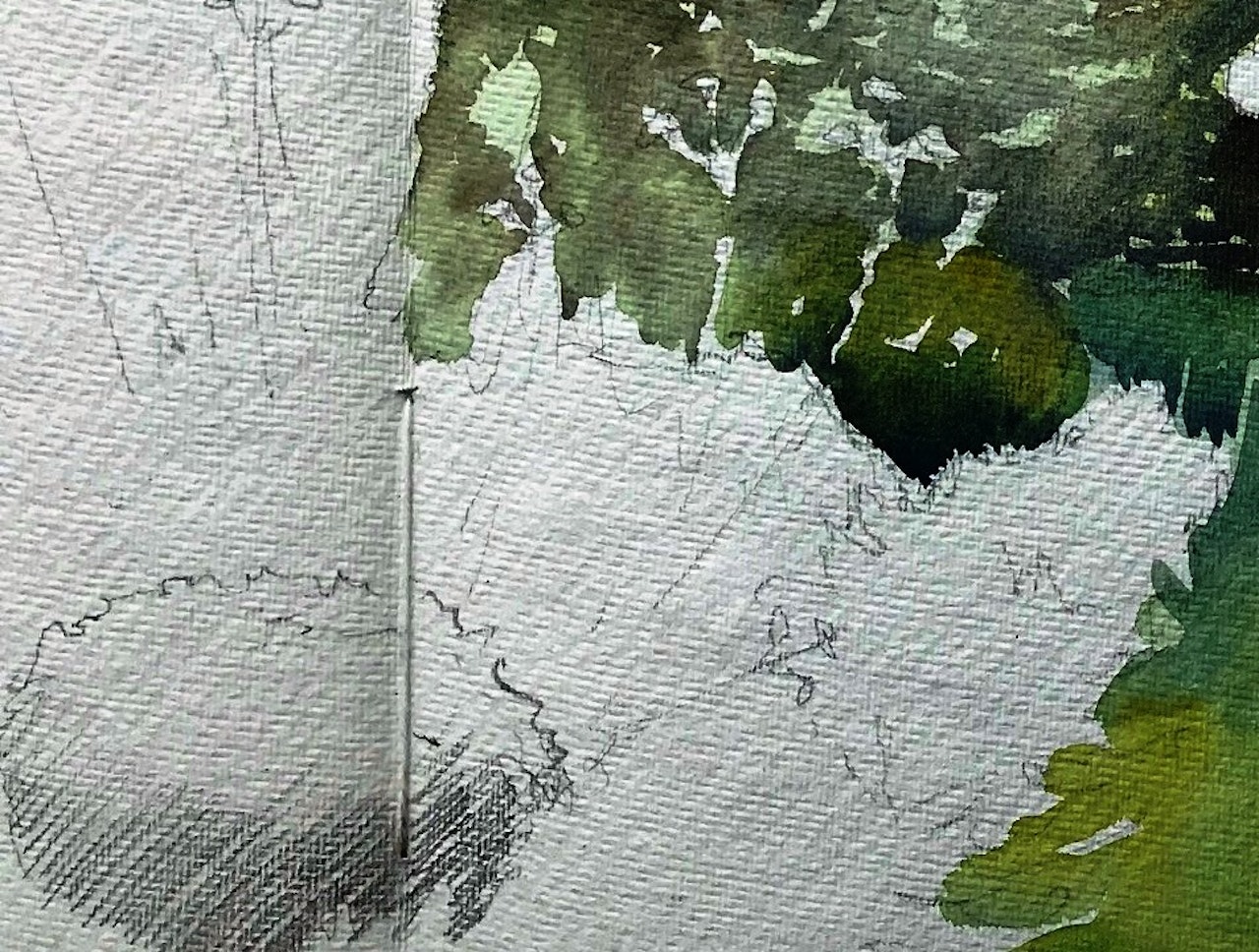 Diary of a Garden

JULY. Hot dogs and figures in a landscape.

By the time we reach July in this part of the world, the cornfields and verges look as if they have blended into one, rebelliously ignoring all boundaries between field and roadside. The grassy verges are pale and golden whilst the still ripening corn is a very similar hue. The gardens are blousy and overblown with everything crowding into one another while the sound of the mowing machine is an almost constant accompaniment. I could not make a diary about our garden without the mower-in-chief putting in an appearance, in this case resplendent in pink shirt to match the border. Painting in gardens presents its own set of challenges and I think mid-summer is one of them. It is very difficult to sort the ‘wood from the trees’ because it is all SO green and chaotic - even the woodpeckers are green. It is now that you have to resist the urge to replicate and instead try to minimize structure and palette with simple choices. , I would not normally go for a view like this one, but as it is a pictorial record of our garden I can’t ignore the seasonal changes altogether.

Fig 1 The Mower. 34cm x 30cm.Watercolour on Khadi Rag paper. The main study in which I use my limited palette of: French Ultramarine, Raw Umber, Hookers Green, Green Gold, Aureolin Yellow and Permanent Rose. The purple is made up of Ultramarine and Permanent Rose. Try to avoid using plain red (i.e. cadmium or Scarlet) to make mauve, it will never work and only ends up a muddy brown.

Fig 1b the Mower. A preliminary ‘blocking in’ of shapes and tones to get an initial sense of the composition. The mowing man does not feature early on, but makes a guest appearance in the final painting. The shadows play quite a big part in this composition and I tried to get them down early on in the proceedings before they disappeared. Knowing where your shadows are positioned is crucial in any painting, even if your pencil outline is eventually absorbed into the wash. Remember that shadows don’t have an outline in real life but if a good shadow shape appears on the scene - draw it in quickly as it may never return. One mistake that people often make is to have the shadows reflecting in different directions - you must know where your source of light is coming from and stick to it.

Fig 1 c) The Mower. Detail in which you can see that I frequently ‘block in ‘working from the background to the foreground adding little moments of importance as I see fit.

Tips on including small figures in a landscape: The inclusion of a human figure can really liven up a composition, however basic and distant it may be - it is a nice addition to your armory. It is important to place the figures as a focal point rather than the main subject; they should lead the eye into the painting but not dominate. I have included a few little images here to give you some ideas and demonstrate that they don’t need to be complicated by such things as arms and legs! If you can’t get to your local life-class (always the best option ) - just try to practice on good natured family or friends so long as they are aware that it is never going to be much of an ego trip. This handy skill takes a bit of practice but will stand you in good stead. The most important thing is for your figures to have movement, so draw them in quickly and see what happens. Dogs and cats and other moving figures can cause issues and don’t get me started on cattle in fields! If you are not careful these can end up looking like a bad attack of acne. Most people tend to overdraw these things; the trick is to observe VERY carefully and then place them with great sensitivity and thought on to the page. Don’t just plonk them anywhere - make sure that they work within your composition.

Fig 2. Some sketchy 3B pencil figures. Make a small circle for the head (hats are good) then a triangle for the body, the legs can be a mere scribble down into a shadow.

Tip: With distant figures, the colours do not need to be separated. Let them run down into each other and always make the skin a burnt sienna tone – no one is pink! Furthermore they almost always have a shadow which can be a continuation of the same colours used in the body.

Fig 3 b) Hot Dog! Diagram of an imaginary ‘Zed’ which runs along the perspective lines and leads you into the garden.

The Secret Garden was one of my earliest childhood influences and I have been strangely drawn to gateways ever since. Here is a typical view looking through an open gate leading down into our garden with a rather hot Norfolk terrier keeping a wary eye. I like using sepia pen and wash with a familiar palette of Green Gold, Hookers Green, Raw Umber and French Ultramarine. On some lines, I allow the ink to run into the paint which prevents it from becoming too illustrative. While I have been working on this garden diary I have been trying to paint faster than usual, in order to keep the washes fresh and avoid getting too bogged down with unnecessary detail – something I know I can do all too easily.

It is important for the onlooker to feel as if he/she can walk through the garden and down an imaginary path from one point to another, rather as Mary must have done in the book. With this view I employed a perspective trick by opening the wooden gate open inwards at an angle in order to draw the eye. This is where the idea of the letter ‘Z’ (either accidentally or on purpose) can be superimposed over your drawing in your minds’ eye. It can also be an inverted ‘Z’ like the one in Fig 3b). Apologies for the wobbly red line, my skills do not extend to the inner workings of Windows Office, but you get the idea!

I found it difficult to get the shadow tone right on the stone slabs and had to lift some of it off in the end. Feeling the need to convey the feeling of gently swaying willows in the background, I put in a very light bluey wash as an acknowledgement of their shape. They are a dominant part of our garden and as such we love them – even though they make rotten firewood and drop twigs all over the place.

As children we used to make pictures by squeezing flower petals, and rubbing them onto some paper to see what colours they made; most of them were a bit dreary but some were incredibly permanent (mostly the reds) Sometimes I think that we are stuck in a mindset back when flower beds were laid out in squares of colour like an old Reeves paint box. As artists we have to move beyond this and be ready to contemplate and create from the tools we have to hand whether it is a simple stick of charcoal “ … if you haven’t got red use Blue”